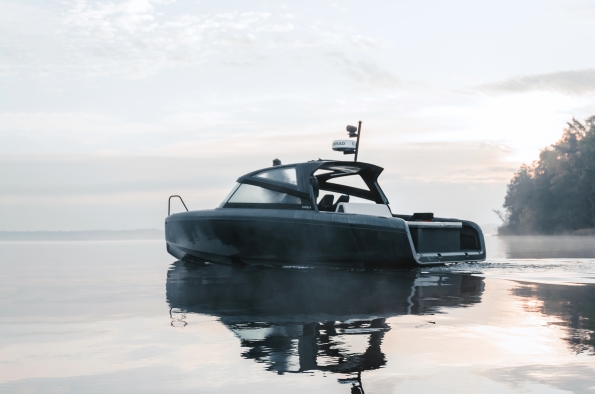 GOTHENBURG, SWEDEN – 17 January 2023. The new Candela C-8 ‘powered by Polestar’ is the first product from a partnership between Polestar (Nasdaq: PSNY) and Candela. The two Swedish premium mobility brands reached an agreement in August 2022 for Polestar to supply batteries and technology to power Candela’s electric hydrofoil boats.

The Candela C-8 ‘powered by Polestar’ is intended to use the same 69 kWh battery pack and DC charging technology as the Polestar 2 Standard range Single motor. Candela expects range of up to 57 nautical miles on one charge at a cruising speed of 22 knots, comparing favourably with internal combustion engine powerboats, and with a high-speed range 2-3 times longer than conventional electric speedboats.

“With batteries from Polestar, the Candela C-8 becomes the first electric vessel that can travel to destinations that were previously only reachable by combustion engine boats. The Candela C-8 powered by Polestar marks a significant breakthrough for electrification at sea,” says Gustav Hasselskog, CEO and founder of Candela.

This high electric performance at sea is possible thanks to a combination of innovative technology from both Candela and Polestar. The Candela C-8 uses an efficient direct drive pod motor – the Candela C-POD – and ‘flies’ on computer-guided hydrofoils that lift the hull above the water at high speeds, reducing energy consumption by up to 80% compared to traditional motorboats.

In addition to the 69-kWh battery pack from Polestar 2, Polestar also supplies DC fast charging technology for the Candela C-8, as well as sharing Research and Development capabilities to integrate the technology and software in a marine application to transfer it from land to sea.

“Sharing know-how on batteries and vehicle engineering with Candela will help reach our shared goal of transitioning to a future where all forms of transport are sustainable,” says Thomas Ingenlath, CEO of Polestar.

The supply of batteries and charging componentry to a third party in this way is a first for Polestar as an EV manufacturer and extends Polestar’s efforts to drive sustainable electric mobility beyond the automotive industry.

About Candela
Candela Technology is a Swedish tech company whose mission is to speed up the shift to fossil fuel-free lakes and oceans. Using computer-guided hydrofoils – underwater wings that lift the hull above the surface, thereby overcoming the friction of water – Candela’s craft use up to 80% less energy at high speeds than traditional motorboats.

Candela was founded in 2014 by engineer Gustav Hasselskog and introduced its first production model, Candela C-7, in 2019. With a range of 50 nautical miles at 20 knots, the C-7 set several world records for electric boats. The limited production run of 32 units ended in 2021.

In 2022, Candela water launched the bigger, high-volume successor Candela C-8, which is designed to make electric boats mainstream. With space for eight passengers, and equipped with the Polestar 2 battery, it has an expected range of 57 nautical miles at 22 knots and a top speed of 30 knots. Powered by the Candela C-POD, an electric pod motor developed in-house by Candela’s 50-strong engineering team, it is 400% more efficient than other powerboats on the market. With more than 150 units sold to date, the C-8 is currently the best-selling electric premium boat.

In 2023, Candela is launching the Candela P-8 Voyager taxi boat and the P-12 electric ferry, which will bring the company’s revolutionary electric hydrofoil technology to commercial vessels.

Polestar is headquartered in Gothenburg, Sweden, and its vehicles are currently available and on the road in markets across Europe, North America, China and Asia Pacific. Polestar cars are currently manufactured in two facilities in China, with additional future manufacturing planned in the USA.

Polestar has produced two electric performance cars. The Polestar 1 was built between 2019 and 2021 as a low-volume electric performance hybrid GT with a carbon fibre body, 609 hp, 1,000 Nm and an electric-only range of 124 km (WLTP) – the longest of any hybrid car in the world at the time.

The Polestar 2 electric performance fastback is the company’s first fully electric, high volume car. The Polestar 2 model range includes three variants with a combination of long- and standard range batteries as large as 78 kWh, and dual- and single-motor powertrains with as much as 350 kW / 476 hp and 680 Nm.

In 2024, the Polestar 5 electric performance 4-door GT is planned to be launched as the production evolution of Polestar Precept – the manifesto concept car Polestar released in 2020 that showcases the brand’s future vision in terms of design, technology, and sustainability. As the company seeks to reduce its climate impact with every new model, Polestar aims to produce a truly climate-neutral car by 2030.

In March 2022, Polestar revealed its second concept car, an electric performance roadster which builds on the design, technology and sustainability ambitions laid out by Precept and showcases the brand’s vision for future sports cars. The hard-top convertible presents an evolution of the unique design language first shown by Precept and emphasises a dynamic driving experience. The concept further develops the focus on sustainability and technology, aiming towards greater circularity. Polestar confirmed in August 2022 that a version of the concept will be produced as the Polestar 6 electric performance roadster, with launch expected in 2026.