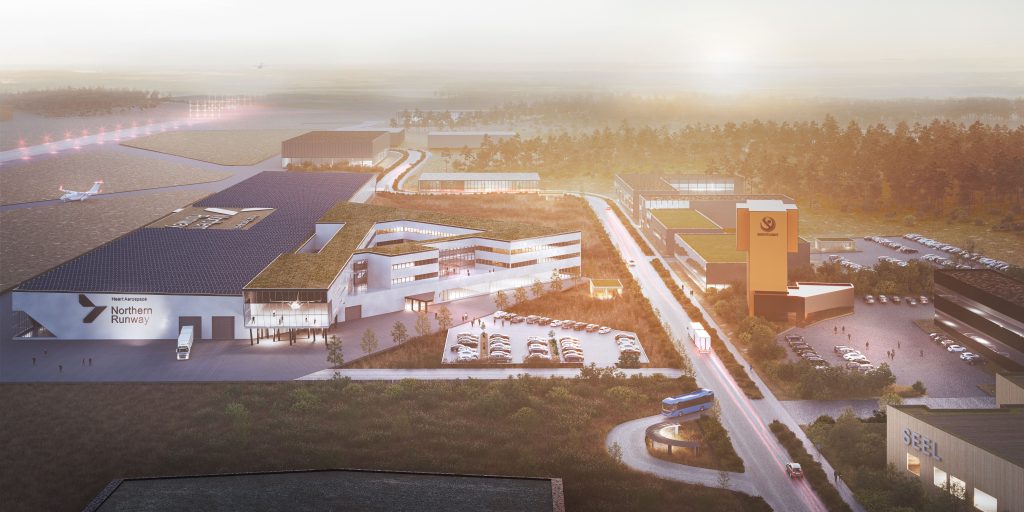 Heart Aerospace will build sustainable state-of-the-art offices, production and flight test facilities which, together, will form a new campus which will go by the name the Northern Runway.

“We have a plan and it’s not just to build a new electric airplane, but a whole new industry,” said Anders Forslund, founder and CEO of Heart Aerospace. “Sweden is the origin of flight shame, an anti-flying movement, but with Northern Runway we will make electric air travel a reality and preserve flying for future generations.”

Heart Aerospace’s Northern Runway campus will form part of the Castellum owned development area Gateway Säve, where a unique site for sustainable logistics and electric mobility is being developed.

“Gothenburg has distinguished itself as a driving force within electrification, with world class research facilities like the Swedish electric transport laboratory, SEEL, Chalmers University of Technology and a large cluster of companies focused on battery and electric vehicle development,” said Sofia Graflund, chief operating officer at Heart Aerospace. “The ambition that Castellum and the City of Gothenburg have for Gateway Säve is truly unique and that is why we have decided to establish our new industry here.”

Heart Aerospace currently employs 130 people, but the company is growing rapidly and expects to employ around 500 people by 2025.

”We are extremely proud that Heart Aerospace has chosen Gothenburg for this step in their expansion, which we will give full support. The establishment will generate an additional 500 Swedish jobs by 2025 and even more when series production begins,” said Patrik Andersson, CEO of Business Region Göteborg.

The long term recruitment base in Gothenburg is strong due to its proximity to Chalmers University of Technology, ranked among the top 100 in the world in terms of graduate employability.

Note to editors:
More information on “Gateway Säve” can be found on www.gatewaysave.com.

At Heart Aerospace we work at the cutting edge of technology while contributing towards a sustainable future. Heart’s mission is to create the world’s greenest, most affordable, and most accessible form of transport. This mission is grounded in the outlook that electric air travel will become the new normal for regional flights and can be transformational in addressing the industry’s key sustainability challenges.