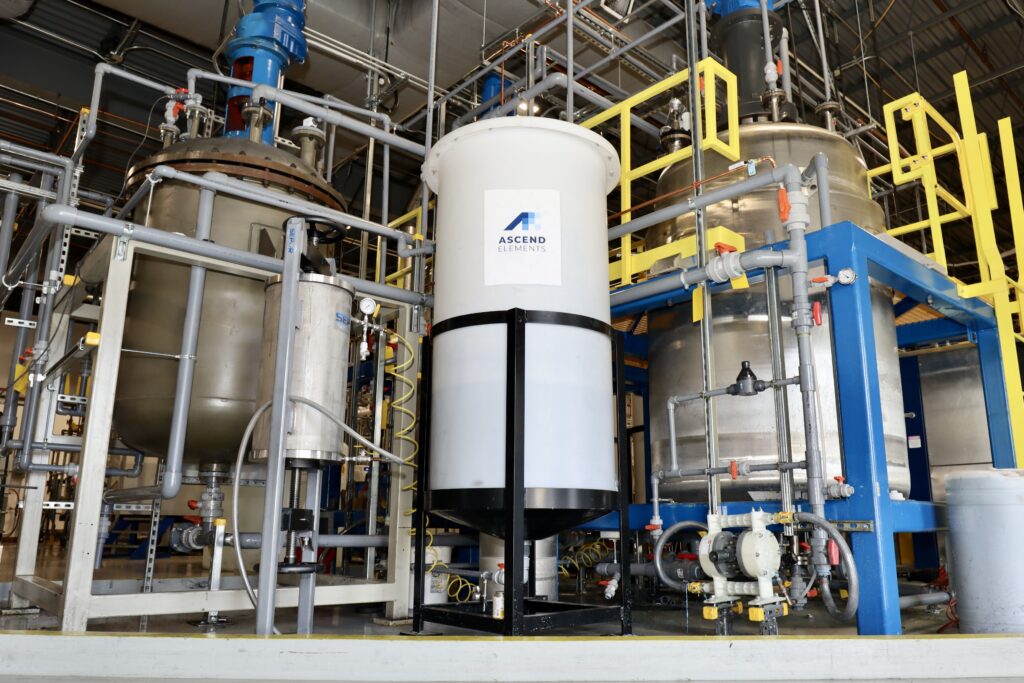 WESTBOROUGH, Mass. (April 27, 2022) Ascend Elements is sharing new details of its innovative Hydro-to-Cathode™ process technology, which helps explain how the company can transform critical elements from recycled lithium-ion batteries into new cathode materials that rival or exceed the performance of cathode materials made with virgin metals.

The company is bringing advanced materials engineering to the recycling industry. By engineering the composition and microstructure of lithium-ion cathode particles during the direct precursor synthesis phase of its Hydro-to-Cathode process, Ascend Elements can deliver custom-made battery materials to precise customer specifications.

“Depending on the intended application, battery manufacturers require cathode active materials with different nickel, cobalt and manganese concentrations. They may need battery material with a specific particle size, crystallinity, or porosity to meet their requirements,” said Eric Gratz, Ph.D., Co-founder and CTO of Ascend Elements. “These adjustments in the elemental composition of the cathode material can make a huge difference in the energy density, safety, power, cycle life and overall performance of batteries.”Hydro-to-Cathode™ leaching tanks at the Ascend Elements battery recycling and cathode manufacturing facility in Westborough, Mass.

The battery chemistry and elemental composition of a lithium-ion battery is largely defined by the cathode active material used in the battery. A light-duty passenger EV battery optimized for weight and range will require a different cathode material than a commercial vehicle Li-ion battery designed for power and durability. Similarly, cathode material to be used in a power drill will not meet the same specifications as battery material meant for a laptop. The variety of battery chemistries is as varied as the many battery applications out there, from massive utility grid energy storage systems (ESS) to handheld smart phones.

In other words, Ascend Elements can recycle a 10-year-old battery from a first-generation EV, break it down to an aqueous solution containing lithium, nickel and cobalt atoms, and then rearrange those atoms into the newest type of cathode active materials – from NMC 811 to NMCA or any other Li-ion battery chemistry.

The incoming feedstock can even be a mixture of different lithium-ion battery types and elemental compositions — used batteries from old EVs, laptops, cell phones, scooters, and power tools. Even Gigafactory scrap and waste can be mixed in. There’s no need to sort batteries into different categories before recycling.

“Our technology can customize and engineer cathode active material in many ways – from composition, particle size and distribution to crystallinity, morphology, and porosity – all tailored to specific customer requirements,” Gratz said.

In late 2021, the process was shown to enhance performance of batteries made with recycled materials. A peer-reviewed study published in the scholarly journal Joule found battery cells made with Ascend Elements’ engineered cathode material had between 30% and 50% longer cycle life than traditionally made battery cells. The study also found an 88% higher power capability compared to traditional lithium-ion battery cells.

These performance improvements are attributed to the microstructure of the engineered cathode particles. Modified porosity of cathode particles improves lithium diffusivity, which means lithium ions can travel through the cathode material more easily for higher power capabilities. The modified pore structure also provides strain relief, allowing expansion and contraction during charging and discharging without damaging the particles in the cathode.

“Our process is capable of other engineered characteristics beyond just porosity, including particle size, shape, and distribution,” Gratz said.

Beyond these material engineering capabilities, the Hydro-to-Cathode™ process is also much more efficient and environmentally friendly than traditional cathode manufacturing processes. The process recovers 98% of the critical battery metals in spent lithium-ion batteries and manufacturing scrap and produces new cathode material at half the cost and 90% lower greenhouse gas emissions compared to similar cathode made with newly mined and refined metals.

“Microstructure engineering enables us to make sustainable battery materials that work as well new,” Gratz said. “There’s no need to compromise on performance or value for sustainability.”